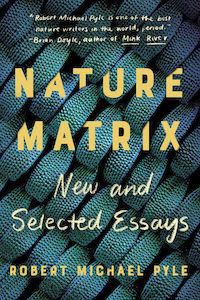 Dr. Robert Michael Pyle (Bob) is a friend and colleague. We are collaborators on the spoken word / musical project Butterfly Launches from Spar Pole (Spar Pole). We are also members of the Grays River Grange. I offer this information, not for biographical reasons, rather, it is to disclose my association -- I am biased!

Bob, the author of 24 books and more, latest is Nature Matrix: New and Selected Essays, published by Counterpoint Press. Bob works within the scope of "Nature Writing". I share this as a reference to you, the reader; as Bob, in this tome states his opinion about genres and labels in literature. The author believes there is no such thing as Nature Writing. The explanation for this belief is the thread that binds Nature Matrix; we are of / part of nature so how can there be any separation?

Bob has published his manifesto — and we'll get to that — but he needs to dispel any dogma in the course of articulating the precepts of the order. He, "just doesn't like definitions that rely on negative information". This is a reaction to the term Atheist. Bob's outlook is that of what he refers to as Alltheist; "either everything is sacred, or nothing is" — a belief held his whole life. In fact, his early term for the concept was "Naturo-Pantheistic Syncretism". What has changed is the new sporty term of Alltheist.

I get a name drop from Bob in this Alltheist final chapter of the work. I am flattered, but must say Nature Matrix received a swell review in the Wall Street Journal. And just yesterday, was announced for the "long list" of a PEN America prize. This is way more attention than Spar Pole and Giants in the Trees have received — combined! (I guess I take what I can get anymore, but thanks for the props brother Bob.)

Basta! Let's get to the core of the book -- the eponymous chapter. Here is the manifesto; Nature Matrix is a six point plan composed of the following elements:

Pyle explains these principles in the course of their enumeration. He then follows by stating, "If Nature Matrix sounds Utopian, it is actually a fairy tale" and that it also holds a "fond naiveté".

These six elements comprise no mere policy proposal. This is ALLTHEISM, after all. So, it's basically a faith, and as such, provides a lot of latitude for the liberated mind. For me, the idea of anarchism is similar. It is not a hard policy concept, rather, it is an ideal to work towards. And like Bob's term of Alltheism, my own term for this is Pacific Anarchism. (But hence I can sprawl, so back to Bob's book.) Like any decent idea, or even adhering to good manners, Nature Matrix is an invitation to the reader: Come on in and let's think about some things.

Pyle does offer concrete proposals; such as a complete, ready for print, multiple choice entry exam for individuals to take before allowed into national parks and wilderness areas. Nevertheless, Nature Matrix, is dominated by nature writing. Sorry Bob, I play acoustic finger-style guitar and accordion every day, but I am basically a Grunge bassist to most people who need categories to make sense of society.

There are elements of Pyle's manifesto throughout, but this work has plenty to offer readers of nature books. He explores the Seattle suburbs on the east side of Lake Washington where we might as well be in the most remote wilderness. Bob wanders a vacant lot and another area under a freeway overpass to discover a world of wonder, where flora and fauna can thrive. He considers California's Mineral King as a sacred place, even as he wades through litter and crowded parking lots. He's chasing butterflies in the Columbia Gorge, and does not mind the traffic jam outside of Portland, Oregon.

Here is the essence of the idea of Nature Matrix; it is the syncretism that is really our gift of perception with being able to "feel" the world around us.