Parades and the Politics of the Street Festive Culture in the Early American Republic by Simon P. Newman, 1997 University of Pennsylvania Press

Freedom, democracy and equality — these are the basic ideals of the American way. They capture the imagination, yet also form the basis of our laws. These tenets dominated the struggle for American independence and endure in romantic notions of the revolutionary era. The reality of the period, however, reveals a discrepancy between principles and practice as freedom, democracy and equality were reserved for white men of means. In Parades and the Politics of the Street, Simon P. Newman’s research focuses on the 1790s and how social events and other rites of participation were an important forum of political activity for those excluded from the franchise of democracy.

The creation of the United States tends to focus on those known as the Founders - the men who agitated for revolution and after independence signed onto the US Constitution. But this small group would have never succeeded without broad based support. They needed rural farm folk, craftsman and artisans, free and enslaved black Americans and, of course, the female sex. A popular culture rooted in revolutionary spirit was expressed through parades, songs, feasts, toasts and symbolic rites. 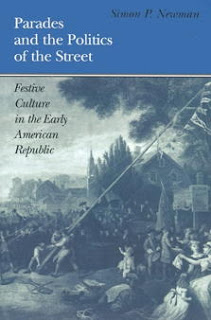 Once independence was won, this means of expression endured into the partisan politics of the new republic. Newman’s research shows us how the rivalry between the Democratic Republicans and Federalists manifested among the general populace.

Newman has combed through complete runs of over fifty late 18th Century periodicals. He also examined journals, magazines, diaries and correspondence of the era. As a result, the footnotes are extensive and the bibliography itself is twenty pages long. This academic tome can read like a chronology of events, so at times the narrative suffers. Nevertheless, this extensive catalog of actual proceedings paints a good picture of how robust and broad based political expression was the beginning of the United States.

So what were these symbols and rites and what was their meaning?

Toasting for or against certain ideas or people was an important articulation of political belief. Decorating liberty trees and erecting liberty poles was a common practice in the American Revolutionary era. In the 1790’s, the liberty pole went on as the symbol of support for the French Revolution and its heady ideals of fraternity and liberty. The red, white and blue cockade along with singing the “Ça Ira”, both imported from Republican France , was popular among common folk. People celebrated American Independence Day. All these rites included marches, parades and civic feasts; events on the street level practiced by those whose interests were with Democratic Republican policies.

On the other hand, Federalists consciously constructed a presidential culture of and around George Washington hoping that popular support for their leader would be favorable for the enactment of their policies. The Federalists presented the first president in a way that appeared monarchical. Washington himself conducted levies and receptions that held a regal tone. This was a reflection of the beliefs of Alexander Hamilton, John Adams and other Federalists in a hierarchical society.

Democratic Republicans needed to attack this anti-revolutionary notion of some kind of American king. While the tone of Washington’s presidency was an issue, however, it was the first administration’s support for fiscal policies that appeared to benefit elite monied interests that fanned the flames of partisan expression among common folk. Because of Washington’s enormous popularity, it was difficult to separate the attacks on the administration’s practices and policies from that of the national hero himself. Democratic Republicans would toast Washington, but with qualifications. They would honor the hero, but also include mentions of liberty and other republican values.

Popular reaction to the monarchist tendencies of the Federalists, along with discontent over the Jay Treaty with the British, manifested in widespread celebrations of the French Revolution. It’s here that Democratic Republicans worked to win public sentiment, but it was not without its problems. These celebrations tended to engage women, low status whites and blacks. Women could be seen as straying too far into the male domain of the public sphere. And, of course many Democratic Republicans adamantly opposed the extension of French revolutionary ideals of liberty, fraternity and equality to black Americans. Free black Americans were wearing liberty caps as a celebration of the respective French and Haitian revolutions - events rooted in violent overthrow that made white men uncomfortable regardless of their political allegiances.

Both parties and their supporters celebrated Independence Day. But even these events were partisan with both sides holding their own festivities. If there was one thing shared among the factions, it was the systematic exclusion of blacks – people drawn to the notion of liberty and equality for serious reasons. Free blacks were literally chased away from celebrations. They then held their own explicitly black alternative to the Fourth of July celebrating Haitian Independence Day every January. This is yet another example of celebrations and rites as a form of political expression.

Newman’s study is a remarkable account of the political polarization that appeared at the very outset of the United States. It strikes me how consistent the popular expression of partisanship is over time. Today, we tend to look at American politics in terms of red and blue. During the 1790’s, what color of cockade one wore sent a message of allegiance. Those who tended to support Federalist policies wore the black cockade – a symbol of the revolutionary war. But it was Democratic Republicans with many women, low status white and black supporters who chose to wear the red, white and blue cockade – a symbol of the French revolution. I see this as a precursor to bumper stickers or political buttons that people exhibit today.

In his conclusion Newman states how the rites and symbols of political participation in the streets endured to influence later popular movements like civil rights and universal suffrage. In my opinion, considering the long-term struggle for inclusion, it seems like a shame that more people are not participating today.

It’s common for people to decry the partisanship in our current politics as if it were a recent phenomenon. But Newman’s work shows that partisanship has been with us from the start of the nation. Furthermore, when people are not verbally expressing their beliefs, they’re still finding symbols or converging in public events that convey a message.