The Inevitable Party: Why Attempts to Kill the Party System Fail and How they Weaken Democracy. Seth Masket Oxford University Press

Seth E. Masket is Associate Professor and Chair of the Department of Political Science at the University of Denver. His new book is The Inevitable Party, a study of the consequences of anti-party laws in the United States.

Starting over 100 years ago, would-be reformers have taken power away from political parties in an attempt to remedy the effects of political machines and the bosses that controlled them. Masket tells us how today the new boss is the same as the old boss—as political insiders are resilient. They adapt to rules intended to disburse power, resulting in “reforms” that weaken democracy by fostering lack of transparency and polarization.

Professor Masket tells us about the “policy demanders”. These are individuals and the groups they form to advocate policies that reflect their needs and values. I think other terms for the policy demander could be; insider, special interest, consultant, partisan, political elite, operative and others. These actors fill the vacuum left by political parties weakened by state policy.

The book offers case studies such as Colorado in 2002. Voters passed constitutional amendment 27—which sharply limited money parties and individuals could give to state legislative candidates. Advocates of the amendment claimed this reform would, “reduce the impact of special interests on the political process and increase the influence of individual citizens” (p. 36). Indeed, political parties were crippled by the amendment’s passage, however, policy demanders skillfully circumvented state campaign finance prohibitions—while at the same time consolidating power for themselves.

A group of liberals known as the “four millionaires” recruited candidates to run as Democrats and used independent expenditures to target critical races for the Colorado legislature. Masket says these policy demanders preferred to call themselves the “Roundtable” (p. 38). The Roundtable worked with traditional Democratic party groups such as labor, environmental advocates and others during the 2004 campaign. The Roundtable spent around $3 million on its efforts, resulting in longtime minority party Democrats winning the majority in both chambers of the Colorado legislature. 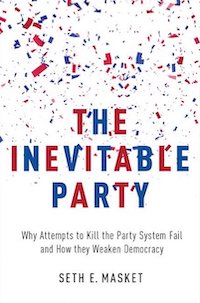 The Inevitable Party gets deeper into the situation with mixed-method case study. Masket analyzes voter turnout and compares the amount of money spent in certain races. This study found many donors were giving less to the Colorado Democratic Party, and instead gave to the Roundtable. One of the effects of the money was how Roundtable supported candidates were identified as the favorites early on (p. 56). With ample funding, these favorites deterred others from running for office. In fact, only five out of 84 Democratic primaries in Colorado were contested in 2004.

Primaries are another longstanding feature of our elections that promise to reduce the impact of special interests on the political process and increase the influence of individual citizens. However, this century-old reform seemed to wither in the face of a new campaign finance law placed on top of it. The result was determined policy demanders becoming the new bosses crowning their preferred candidates for the ballot.

Chapters in the book examine other cases in various states. An examination of California’s 2003 gubernatorial recall shows how parties and policy demanders shaped that situation, regardless of California’s anti-party policies; which recall is one of. Masket then looks at another case with how Minnesota did away with its non-partisan legislature after it became politically polarized after WWII. Another chapter tells of how Wisconsin adopted partisan primaries in the first place—it was a fluke of events and passed after policy demanders recognized the benefits—to them—of this anti-party reform.

In another example we learn how Nebraska—with the nation’s only non-partisan legislature—became politically polarized. The scholar’s research suggests the adoption of term limits could be the cause. How so? He says, policy demanders regularly recruit and support candidates who have no institutional memory. These temporary legislators then rely on the people who helped get them elected for guidance.

The title of the book’s concluding chapter is “Quit Fixing It”—which speaks for itself. The point is that many so-called reforms fail to achieve their goals while producing unintended consequences that make matters worse. He wraps the book up by looking at two things: One is campaign finance, and the other is how parties contribute to representative government and what happens when there is no one to fill that role.

On campaign finance he says, “Changing the way our campaigns are financed has become a business unto itself, an ongoing crusade to rid politics of the scourge of money and, indeed, corruption” (p. 151). Masket adds, “It should be noted here that political scientists have generally had a very difficult time identifying any effect of campaign spending on the behavior of elected officials.”

Of course, he mentions cases of illegal graft, however, Masket cites research that finds limiting campaign contributions makes partisanship worse (p. 152). This is because formal party organizations tend to fund more moderate candidates. Limiting funding sources results in individuals and interest groups finding ways to give money. These independent actors tend to be more ideologically motivated—and this reflects on the candidates who end up being funded and elected.

On parties, Masket points to how they provide information to voters for the ballot. Research shows half of voters cannot name their state legislators (p. 161). Parties package social and economic issues for voters; who in turn use the party cue on the ballot to help choose candidates. When there is no party label, many voters tend to roll off the ballot—meaning they simply skip races.

Regardless of this potent informational tool, Masket says parties are viewed by most people as corrupt organizations. The scholar adds that political actors can find willing allies in the American people if they frame their reform proposals as curbing the power of parties (p. 159).

Masket does point to Ranked Choice Voting and media reform as promising ways to fix what is ailing our democracy.

I highly recommend The Inevitable Party to people who are interested in political reform. My short review barely scratches the surface of information available in the book. While Seth Masket provides an interesting narrative on how election rules impact representative democracy, there are sections where he plugs data into research models.

This book just confirms what I have been urging reformers to do—which is to take a holistic view of elections. Instead, many reform proposals attempt to tack structures on top of existing dynamics, which could be failing themselves. For example, Seattle has several features of its electoral system, with many of them implemented decades apart. There are mandatory runoff elections, an August primary, a strong mayor system, a nine-member council elected by seven single-member districts with two winner-take-all at-large seats, non-partisan ballots and public financing of campaigns. Maybe some of these existing features should have themselves been reformed before the recent introduction of districts and public financing? I followed the campaigns for districts and public financing respectively and recall no mention of how the reform proposals would interact with existing features—or even why the existing rules were there in the first place. Instead policy entrepreneurs argued along the lines their proposals would reduce the impact of special interests on the political process and increase the influence of individual citizens.

Reformers should recognize that political association is the voice of a group of people, and when combined with social networking, the potential is promising. We already see it with crowd-sourced campaigns. If the parties themselves embrace the openness that can be fostered with technology, a new kind of association could emerge. The effect of this lets parties package issues while at the same time interested citizens pool their resources around candidates who articulate the message.

Instead of creating more rules on top of an already broken system, lets instead strip away the existing prohibitions on parties and allow groups of citizens to do what comes naturally—which is associate and rationally pursue their interests.