My Testimony in Olympia Supporting Options for Local Elections

I am testifying today in support of allowing local communities and jurisdictions the ability to move away from winner-take-all at large elections.

This committee is considering districting as a way for localities to remedy possible issues with minority vote dilution. Nowhere in the Voting Rights Act of 1965 does it mandate exclusive districts as a remedy. In fact, the jurisprudence established since this important federal law was passed gives local communities options for voting remedies. While most choose a districting plan, others opt for a modified at-large system.

There are over 100 jurisdictions in the United States that successfully use this kind of voting system. For example Texas, which has a large Latino population, has 40 school boards that use modified at-large to elect their board members.

The City of Yakima wanted to settle its Voting Rights Act case with a hybrid single-member district / modified at-large system to elect their seven seat council. There could be five districts, including a majority-minority district and a minority influence district. The two at-large seats work like this: voters get one vote to elect two council members. When votes are counted, the top-two vote getters win. 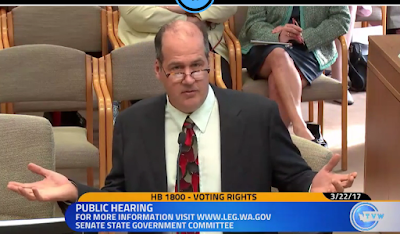 Instead of working towards a compromise, the plaintiffs in the Yakima Voting Rights case adamantly rejected this offer by insisting on exclusive districts. They argued that state law prohibited modified at-large. The judge cited state law in denying Yakima a way to avoid the problems with districting.

The Federal Voting Rights Act does not mandate districts to remedy minority vote dilution. The Washington State Constitution does not mandate single-member districts in local elections, or House elections. Districting is a political decision. Not allowing a local option for modified at-large elections makes exclusive racially fashioned districts the only way communities can move away from the potential legal liability of majority bloc voting fostered by winner-take-all at-large elections.

I support a Washington State Voting Act which allows the local community to implement remedies to cure minority vote dilution. I submitted an amendment for the bill to this committee that puts localities—and not attorney’s from across the state—in charge; so long as the local remedy is a legally established way to make elections more inclusive.

I would like to respectfully submit language including a modified at-large option for the legislation you are considering today.