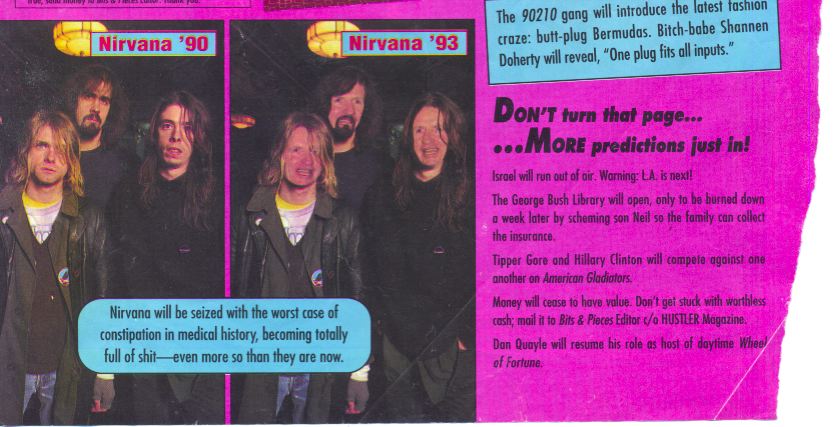 Here are some recollections of the time Kurt, Dave and I went to Flynt publications in Los Angeles. The memories are a little hazy but here is the best I can do.

It was the summer of 1991, after Nevermind was recorded that spring and before its release in September. Dave, Kurt and I started our little day trip at Geffen records on Sunset Boulevard and drove down to Wilshire. Can't recall if a label publicist was with us. After a short drive, we arrived at this really nice, about 10 story modern office building on a corner with a sign on the top reading: FLYNT PUBLICATIONS - the home of Hustler magazine.

Inside a foyer with elevators, we went to a floor above. The lift doors opened and there was a reception area with a neat vintage painting of a nude woman in repose. I think there was something similar in a clip from the film Easy Rider from inside the brothel in New Orleans. Or, in other words, I thought about that film clip at that moment. This painting likely hung in a brothel ye olden days.

We were waiting on a couch and there were several magazines on a coffee table. Titles like Fighting Knives or Gold Prospector. Thumbing through them, the content reflected the titles with articles and advertising. I don't recall any pornographic magazines and wouldn't have picked one up in front of other people. Ha!!!

So we were invited inside an office and it was to meet the chief editor of RIP magazine. This is a mainstream Rock music publication. I cannot recall the name of the man we met. Hanging on the walls were images of him with members of "Hair Metal" groups. I seem to recall he was flashing his butt in many of the images, so this was a fun loving guy. I cannot recall the conversation we had.

It was smiles and light conversation. I can't remember anything remarkable. We left and walked back to our car. Kurt said that the meeting was for the editor to see what kind of people we were. To, "check us out". I don't feel like we connected with this editor, as I don't think I ever met him again. I have felt a lot of alienation in my life, though I really try to fit into society. I can speak for the band and we were not interested in the genre of music RIP was covering. Of course the Rock music world flipped on its head after Nevermind.

Well, that's my story. What got me thinking about this moment was going through old boxes and I found this clipping from Hustler magazine. I think it's funny how they said we would be still full of shit in the future. I know, as far as myself goes - they were right!

And that looks like an image of H. Ross Perot they pasted over our faces!!!

More of my writing on music